Finally, everyone in the Davis household is healthy, energetic, and so ready for Christmas.

The Christmas shopping is done, we're making cookies for Santa tomorrow, and Drew is scheming on how he is going to catch Santa while he makes his visit to our house.

Plan #1 was pretty straight forward. He told me, "If I hear reindeer on the roof, I'm going outside to look."

Plan #2  is genius and gave me a good laugh. I had just received a box with tons of bubble wrap inside it. And I'm talkin' about the big bubble wrap. The super loud kind. Drew was having a blast popping the bubbles in all kinds of creative ways when he suddenly stopped and said, "I don't think I should pop anymore." When I asked why not he told me, "Because we can lay this bubble paper around the Christmas tree. Santa would have to step on it when he puts presents under there..." Smart kid. We even explained to Jackson why we weren't popping the bubble wrap and he was on board with the plan. Mike tried to pop a few and Jackson said, "No Daddy! That Santa's!"

I love that Drew's still young enough to believe yet old enough to have a little more fun with it. Although it gets harder when they get older. You definitely have to stay on your toes and pay attention to some details.

At school Drew's class had a day where they did Santa's Workshop and made several cute Christmas themed crafts. One of them was reindeer food, aka oats and glitter. Well, magic glitter, of course. They mixed it in a little baggie and then added a little note to the outside of it that said to sprinkle it on your front lawn to help lead Santa's reindeer to your house. Last night I told Drew that we had to remember to do that on Christmas Eve before we went to bed. To my surprise, Drew said, "But we can't sprinkle it on our front yard! Santa's sleigh lands on the roof! How will the reindeer eat the food if it's in the yard. We have to sprinkle it on the roof! Do we have a ladder?" It's a good thing I still have a pretty wild imagination because I put it to very good use during this conversation.

Mike and I had a conversation the other night about how much more fun Christmas is as an adult with kids. I have loved all the talks Drew and I have had about Santa and the "serious" questions he has asked. (Like how will Santa get in our house since we don't have a chimney?) I instantly smile when I think of Jackson, Mr. shy guy, running to hug Santa when we took them to get their picture taken with him. I am ten times more excited to see the boys faces when they wake up on Christmas morning than I ever remember being as a kid. It is going to be a jolly good time!

Merry Christmas everyone!
Posted by Allison Davis at 11:55 PM

I am so happy you are well. Hoping my 14 year old granddaughter is over the stuff by tomorrow. She has the yucky stuff too.

Love Drew's stories. He is really a thinker.

I also enjoyed seeing your layouts on the Jillibean blog. Yea Allison!

So happy all of you are feeling better. Drew is such a smart little guy, love the way his mind thinks. Christmas is fun when you have little ones around, you can see it thru their eyes. Thank you for a great and fun and inspiring year, I'm looking forward to another year with you.

Have a very Merry Christmas!

So glad to hear you are all healthy in time for the big day!
We are moving in the beginning of Jan. so DH and I aren't doing prezzies for us...you know what? I could care less...I'm much more excited for DD and can't wait to see the joy on her face!! I hope she has a blast!
Very Merry Christmas to your family from ours. :)

Glad everyone is well. I agree children help bring the magic back to adults at Christmas time that we seem to have lost somewhere along the way! May you all have a very merry and magical Christmas! Enjoy setting up the new shop and ringing in the New Year bigger and better than ever! I can't wait to see it all!

I am glad that you are all healthy now. Merry Christmas. Thank you for all your inspiration that you have shown through your blog. I love what you do.

Thanks for the chuckles. It's always fun to hear what's going on at your house. LOL

Love the pic and hope you all have a great Christmas! (We've already sprinkled our "reindeer food" outside too!)LOL Now I just need them to calm down and go to sleep!

Here's another tip. Snackable prunes that come in the tub? Perfect size, shape, and color for reindeer poop. :D Gross, huh. But works every time!

Love reading through your Christmas stories. Drew is a smart cookie :)

The magic of Christmas is truly in our children. 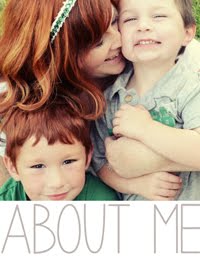